OUR ACADEMY HAS THE BEST INSTRUCTORS AROUND!

The Oregon Pickleball Academy sets the standard as a top notch instructional facility. We offer Private Lessons, Camps, ​CORE Rating Sessions, Weekly Clinics, Play with the Pro, and so much more. Our full service academy is equipped to work with all levels of a pickleball player. Let the Oregon Pickleball Academy elevate your game! Create a CourtReserve account at www.courtreserve.com and select Pickleball Zone as your club. Then use your account to sign up for any of our events the academy has to offer.

Brian grew up on the East Coast and started playing tennis at the age of 8.  By the time he was 12, Brian was being recruited to Florida to train for a potential professional future in the sport.  As a high school player, he amassed an 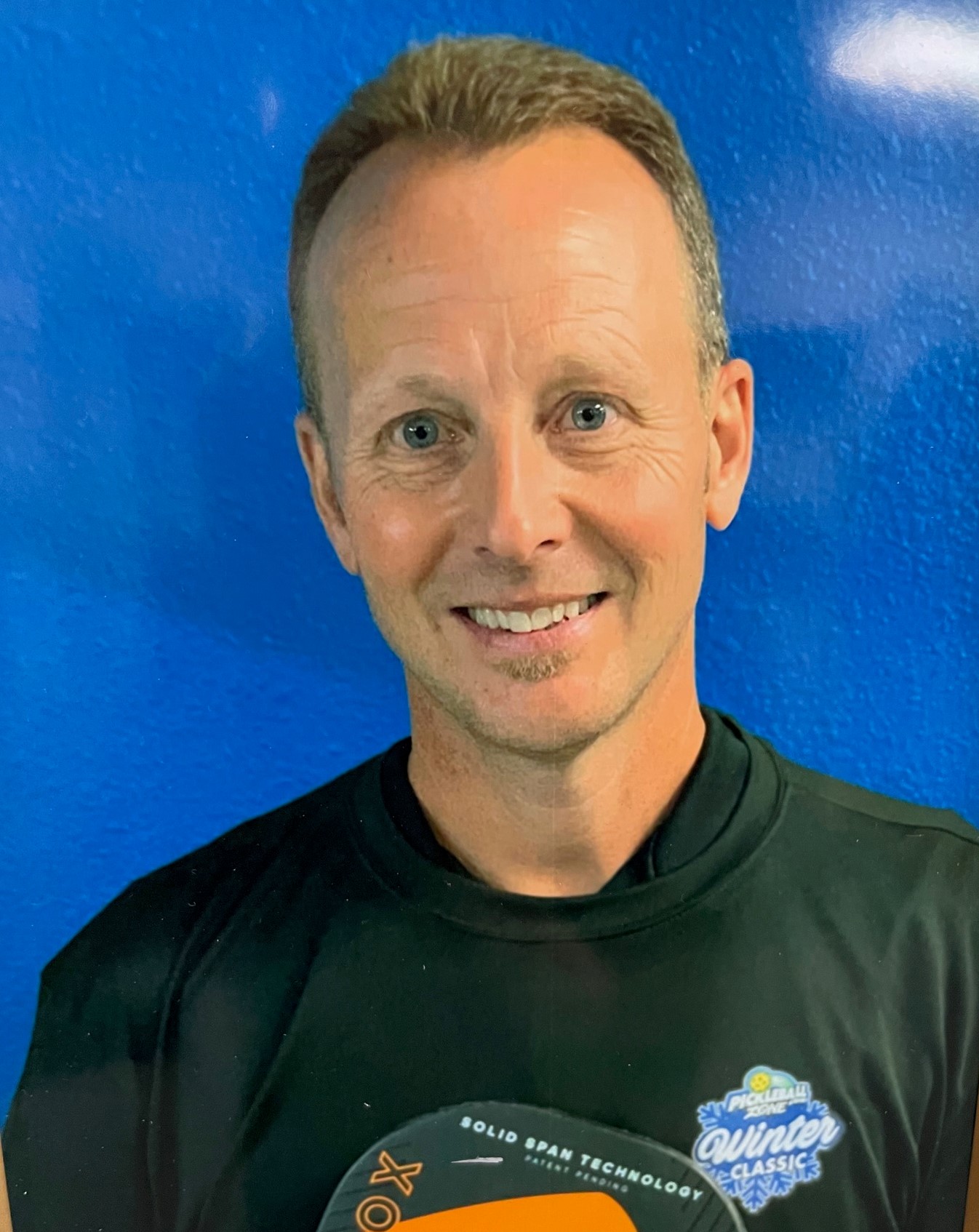 impressiveRecord, going undefeated for two consecutive seasons.  Unfortunately, injuries prevented Brian from going any further in the sport he loved.  In college, Brian discovered the two other loves of his life:  Teaching and his wife, Sheri.  He earned his bachelor’s degree in Education and taught 7th and 8th grade English.

Life brought Brian and Sheri to Bend in 1998 and he began a 20-year career at Crosswater Golf Course. It was also during that time that he rediscovered tennis after not playing for over a decade.  Brian quickly became a 5.0 rated player and competed for doubles and mixed doubles championships.  More recently, Brian was introduced to pickleball and fell in love with the game.  However, his true love for the game lies in teaching.  He loves working with players of all abilities and relishes the opportunity to help them reach their full potential. 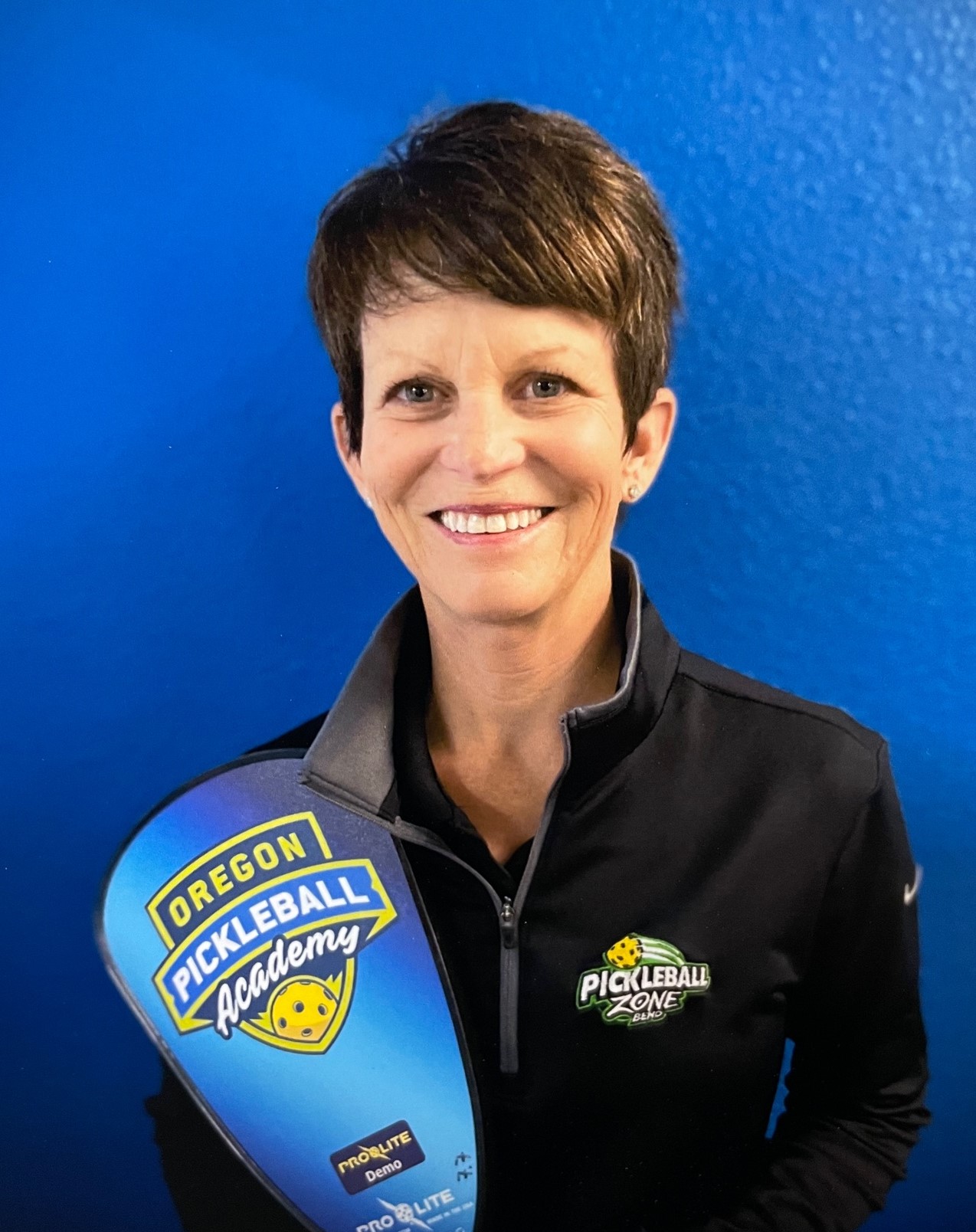 EARNING A BACHELOR OF BUSINESS ADMINISTRATION. SHE PLAYED BOTH SINGLES AND DOUBLES GOING TO NATIONALS 3 YEARS, WINNING THE NATIONAL DOUBLES TITLE, EARNING ALL AMERICAN STATUS AND WAS INDUCTED INTO THE GSU HALL OF FAME. SHE ALSO PLAYED IN GERMANY ON A CLUB TENNIS TEAM DURING THE SUMMER.

MICHAEL IS AN IPTPA CERTIFIED “LEVEL 2” INSTRUCTOR, A CERTIFIED RATING SPECIALIST, AND A FOUR-YEAR TOURNAMENT COMPETITOR WITH MANY GOLD, SILVER, AND BRONZE MEDALS. ALSO, A PASSIONATE PICKLEBALL TEACHER AND COACH, MICHAEL ENJOYS WORKING WITH CENTRAL OREGON PLAYERS IN:

HIS PICKLEBALL CAREER STARTED IN 2014 WHEN A FRIEND SAID “WANT TO PLAY PICKLEBALL”. AFTER MICHAEL SAID “WHAT’S PICKLEBALL” AND A COUPLE HOURS WITH HIS FRIEND AT PINE NURSERY PARK, HE WAS ADDICTED AND WANTED TO PLAY THE NEXT DAY, THE NEXT DAY, AND THE NEXT DAY. MICHAEL HAS NEVER LOOKED BACK.

justin grew up in nashua, new hampshire in a sports-loving family. getting beat in every sport by his older brothers and dad, he took up tennis to avoid early morning swim practices. justin won two tennis state titles while attending bishop guertin high school and played college tennis and soccer at lyndon state college in vermont. after falling in love with climbing and skiing, he moved to crested butte colorado, tahoe city california, kodiak alaska, and finally settled in bend with his wife kathryn, twin boys brayden and julian, and mother-in-law beth. justin has been a commercial fisherman in alaska for the past 22 years, fishing for salmon, crab, halibut, cod, and herring.

NOW RETIRED FROM COMMERCIAL FISHING, HE SPENDS HIS TIME HERE IN BEND WITH HIS BEAUTIFUL FAMILY CHASING HIS 5 YEAR-OLD TWIN BOYS AROUND. AFTER PLAYING ON THE ATHLETIC CLUB OF BEND'S MENS'S TENNIS TEAM FOR A FEW YEARS HE FOUND THE GAME OF PICKLEBALL. HE RECEIVED HIS IPTPA TEACHING CERTIFICATION LAST YEAR AND JOINED THE PZB TEAM. BROKEN TOP CLUB HIRED THE ZONE TO BE THE TEACHING ACADEMY FOR THEIR MEMBERS WITH JUSTIN BEING ONE OF THE HEAD PROS. JUSTIN PLAYS EVERY CHANCE HE GETS NO MATTER IF IT'S A TOURNAMENT OF WITH HIS FAMILY. HE WON MULTIPLE TOURNAMENTS IN 2021 AND QUALIFIED FOR THE PICKLEBALL NATIONALS IN INIDIAN WELLS.

MIKE WAS BORN IN THE CZECH REPUBLIC AND IMMIGRATED TO THE UNITED STATES IN THE MID 60’S. MIKE GREW UP IN TACOMA, WA AND GRADUATED FROM PACIFIC LUTHERAN UNIVERSITY.

MIKE COMPETED IN TENNIS TOURNAMENTS THROUGH HIGH SCHOOL AND TURNED PROFESSIONAL IN THE EARLY 80’S. MIKE’S NOTABLE ACHIEVEMENTS WERE A #4 RANKING IN THE COUNTRY IN THE BOYS UNDER SIXTEEN CATEGORY AND A TOP 500 WORLD RANKING ON THE ATP TOUR.

AFTER PLAYING PROFESSIONAL TENNIS, MIKE MOVED TO LAKE OSWEGO, OR FOR A POSITION AT MT. PARK RACQUET CLUB WHERE HE TAUGHT TENNIS FOR 30 YEARS.

IN JANUARY 2019, MIKE RETIRED FROM TENNIS AND BEGAN HIS PICKLEBALL JOURNEY. MIKE EARNED HIS PPR CERTIFICATION AS A TEACHING PICKLEBALL PROFESSIONAL.

MIKE AND HIS WIFE RECENTLY MOVED TO CENTRAL OREGON AND RESIDE IN EAGLE CREST.

After playing competitive tennis for most of his life, jon officially made the switch to pickleball in 2018. at the time, his dad was the #1 ranked senior player in the world and jon got tired of getting beat up on all the time. since then, he has traveled the world teaching, competeing in tournaments, and discovering the best places to play pickleball.

Jon is also a co-owner of pickleball trips, organizing and leading tours both domestically and internationally. when not on the court, jon loves planning new adventures for himself, his wife kaya, and daughter holland.

In november of 2021 job and scott moore, along with the pickleball pros, conducted a series of clinics at the zone. all of us were very impressed with jon's teaching skills and felt that he would be a great addition to our team. only a few weeks later jon made the move from springfield across the mountains to bend. with jon being at the zone we are sure to see more of scott too. stay tuned for mo(o)re pickleball camps at the zone in the not too distant future.